Redwood City is known as “Climate Test by Government Test. It’s location in the heart of the peninsula is an excellent spot for working in Silicon Valley and San Francisco. Downtown Redwood City recently underwent a major renaissance with a new movie theatre, shops, and a vibrant restaurant and nightlife scene. Redwood City hosts the San Mateo County Courthouse and has the only deep-water port on San Francisco Bay south of San Francisco. The neighborhood of Redwood Shores is part of Redwood City, although it is not possible to travel by road from one to the other without passing through the neighboring city of San Carlos. 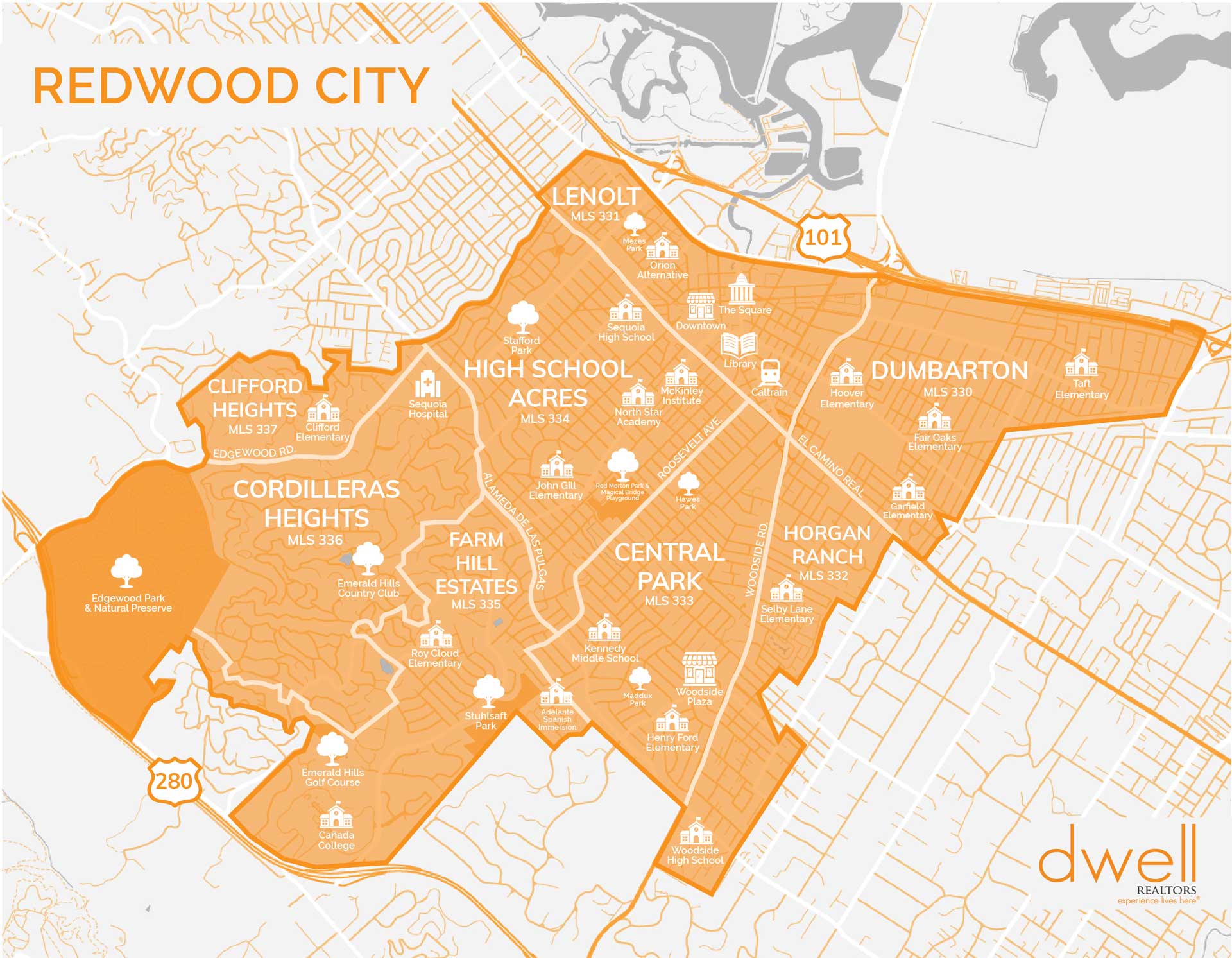 Clifford Heights
Clifford Heights lies to the north of The Alameda and west of Edgewood Road. It is sometimes referred to as Palomar Park and is one of Redwood City’s most desirable neighborhoods. About 1,000 residents call Clifford Heights home yet it is important to note that some of these residences still operate on septic tanks. Clifford Elementary, a K-8 school, is sought after for residents of this area. You can find a wide-range of homes in this area from 1960’s ranchers with approximately 1,600 sq ft to new construction homes boasting over 3,000 sq ft.

Cordilleras Heights/Emerald Hills
This area lies from Alameda de las Pulgas west to HWY 280 and borders the city of Woodside. Emerald Hills is highly sought after and is home to many of the largest and most expensive homes in the hills. Many of these homes are located up long winding roads but these homes also boast gorgeous views and extremely large lots. Emerald Hills Lake is located right in the heart of this area, which is a huge selling point for many buyers. The Elks lodge and Emerald Hills Golf Course are two main attractions.

Farm Hill
Redwoods City’s western most area situated west of the Alameda off Jefferson Ave. Farm Hill has a mix of large and small homes differing from its Emerald Hills neighbor due to its sidewalks and walkability to parks and schools. Farm Hills has a quiet, suburban feel yet the neighborhood has a strong sense of community and togetherness. Roy Cloud Elementary School which is a K-8 is a California Distinguished School. Stulsaft Park is a popular area for kids and hikers with its 42-acres just waiting to be explored. Farm Hills is also home to the Emerald Hills 30 acre 9-hole golf course and Canada Community College.

Lenolt
Lenolt is located on the Redwood City-San Carlos border off Veterans Boulevard and El Camino Real. Its streets are named in alphabetical order ‘A, B, C’. which makes them easily identifiable. Lenolt is approximately one mile from the growing downtown and within walking distance to Caltrain. Lenolt is a great area to get your feet wet as a homeowner. Prices allow a for first time homebuyers to purchase a single-family residence at townhome prices in neighboring San Carlos. Lenolt is served by four parks (Hoover Park, Andrew Spinas Park, Linden Park and Fleishman Park) and many residents enjoy the North Fair Oaks Festival, a one-day food and arts festival featuring music, craft booths and food stands.

Dumbarton
Located in the farthest southeast corner of Redwood City bordering East Menlo Park. It is one of the largest areas with multiple sub-neighborhoods. This is THE MOST affordable area in Redwood City and also the most diverse. Dumbarton features a wide range of housing including apartments, multi-residential buildings and single-family homes. Dumbarton provides easy access for commuters and accessibility to groceries and shopping.

High School Acres
High School Acres is bounded by Roosevelt Avenue, El Camino Real, Alameda de las Pulgas and the San Carlos border. It is one of Redwood City’s oldest neighborhoods, and the site of some of its most desirable and attractive vintage homes. It also offers a wide variety of housing with a mix of mix of expensive residences, semi-affordable and affordable homes. High School Acres is home to the Mount Carmel and Wesley (Edgewood) Park sub-neighborhoods, which are highly sought after with large level lots, stately homes with great curb appeal and character. Sequoia High School is located here and home to over 2,000 students. One of the big draws for families in this area is the ever-popular Stafford Park which is a great spot for summer concerts, birthday parties and family gatherings.

Central Park
Located adjacent to Horgan Ranch and bordered to El Camino Real to the east and Alameda to the West. Central park includes multiple city parks, two shopping centers and two public schools. Woodside Plaza has many affordable homes ranging from 1,000-1,500 square feet. Most are located on medium sized level lots. People move to this area for its affordability and end up staying due to the warm community and neighborly feel.

Horgan Ranch
Horgan Ranch sits right next to Atherton, between Selby Lane and Woodside road, from El Camino to Alameda. Orchards once covered this land, and mini-farms with little houses on big lots that have been transformed over the years into more modern homes, with bigger lots than average. In this area you will find a mix of mid-level and high-end homes. The neighborhood feel may be described by some as rural, with a heavily wooded look and a noticeable absence of sidewalks. Back in 1927, Horgan Ranch was home to a flourishing chrysanthemum-growing industry.

Latest Homes for Sale in Redwood City
See All Neighborhoods